You disliked this video. Thanks for the feedback!

According to the Hollywood Reporter, the latest news on the video was a conservative prank first posted by conservative media personality Brandon Straka. Straka shared the video on his YouTube channel “That’s the Point," saying the clip was sent in by a fan. Straka claimed that the man in the video did not know Cuomo’s real name, only that Rush Limbaugh refers to him as “Fredo.”

“No, punk-a-- b-tches from the right call me Fredo,” A mad Chris Cuomo tells the man in the video. “My name is Chris Cuomo. I’m an anchor on CNN. Fredo is from ‘The Godfather.’ He was that weak brother, and using it is an Italian aspersion."

“Any of you Italian?” Cuomo asks the man and unknown people off-camera.

“You’re a much more reasonable guy in person than you seem to be on television,” the first man tells Cuomo.

“Yeah, well if you wanna play, then we’ll f---ing play,” Cuomo tells him. Sounds like he wanted a fight with the MAGA man.

The man says he doesn’t want any problems.

“Yeah, well you’re going to have a big f---ing problem,” Cuomo replies. “It’s a little different on TV. Don’t f---ing insult me like that. You called me Fredo. It’s like I called you punk b-tch. Do you like that? Do you want that to be your nickname?"
The man then denies comparing Cuomo to “The Godfather” character, claiming he actually thought his real name was Fredo. But Cuomo encourages the man to “own” what he said.

“What are you going to do about it?” the man says.

“Please do," the man replies.

“What, so you can f---ing sue?” Chris Cuomo loses it, inviting the man to take a swing at him. As things get more heated, Cuomo tells the man “I’ll f---ing wreck your sh-t.”

At that point, another man intervenes to split the two up.

“I assume @cnn not available for comment,” tweeted Donald Trump Jr., who shared the video. “Imagine their coverage of this if they were a real news organization?”

“Chris Cuomo defended himself when he was verbally attacked with the use of an ethnic slur in an orchestrated setup,” he said. “We completely support him.” 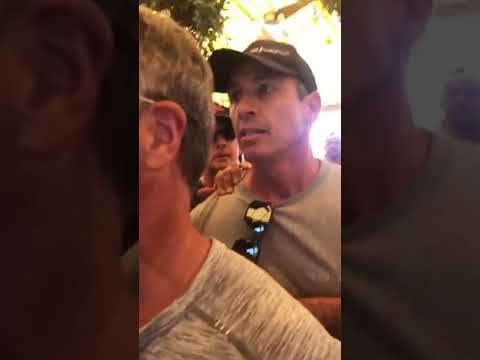 The Chris Cuomo video was tweeted by Ryan Saavedra, a reporter at The Daily Wire, a conservative website run by conservative political commentator Ben...